The Institut de tourisme et d’hôtellerie du Québec (ITHQ) was founded in 1968 by the Government of Quebec. Growing from its original focus on culinary arts and food service, the ITHQ later specialized and expanded its scope to become a leading hotel school whose reputation reaches well beyond the province of Quebec. After starting a process in 2005 to internationalize its programs, the ITHQ is now one of the top hotel management schools in the world.

Launch of the Applied Bachelor in Hospitality and Hotel Management, the first program for which the ITHQ will independently offer a university degree.

The ITHQ signs an agreement with the Marriott International group, the world's largest hotel chain.

The ITHQ signs an agreement with the Qingdao Vocational and Technical College of Hotel Management in China.

The ITHQ celebrates its 50th anniversary.

Bill 150 is adopted in the National Assembly: the ITHQ is no longer subject to the Public Service Act and can now independently grant university degrees.

Launch of the new ITHQ Culinary Camp for children aged 10 to 15.

Launch of the GastronomiQC Lab, the joint research unit in gastronomic sciences of the ITHQ and Université Laval.

Launch of ExperiSens, a college-level technology transfer centre in the multi-sensory customer experience.

The ITHQ refreshes its brand image and unveils its new colours.

The ITHQ signs an agreement with Club Med.

The ITHQ is given a mandate by the National Assembly of Québec to manage and develop the Assembly’s restaurant operations.

At the request of the Ministère de la Santé et des Services sociaux (MSSS), the ITHQ creates recipes for residents in long-term care who come from different cultural communities.

The ITHQ starts a cooperation project with the Cuban Ministry of Tourism (MINTUR) to help train Cuba’s workforce and develop its national cuisine.

Launch of SAQ Workshops by ITHQ, which are training sessions for the general public that combine the art of cuisine with the world of wine and spirits.

The ITHQ’s Centre d’expertise et de recherche (centre for expertise and research) is divided into two entities: a hospitality consulting centre, which provides skills development courses for professionals and consulting services for businesses, and a research centre for applied research in gastronomy.

The ITHQ signs an agreement with Sandals Resorts.

The ITHQ signs an agreement with Fairmont Hotels & Resorts.

The ITHQ wins the Prix d’excellence de l’administration publique (Award of Excellence in Public Administration) in the Rayonnement international (International Achievement) category for its performance during the visit on July 2, 2011, by Their Royal Highnesses The Duke and Duchess of Cambridge.

Sofitel Worldwide selects the ITHQ as the only Canadian establishment to take part in its Accor School of Excellence program.

The ITHQ is selected to receive Their Royal Highnesses The Duke and Duchess of Cambridge, William and Kate, during their stay in Quebec. The royal couple take part in a culinary workshop and enjoy a meal of local Quebec products. This event gives the ITHQ unprecedented international visibility.

Inauguration of the Françoise-Kayler room in memory of the famed food critic.

In partnership with Éduc’alcool, the ITHQ creates the online Service in Action program for servers at licensed establishments in Quebec.

A cooperative agreement is signed between the ITHQ’s research centre and the Lausanne Hospitality Research Centre in Switzerland.

The ITHQ signs an agreement with the Relais & Châteaux association to support the training of the next generation of highly skilled and elite hotel and restaurant professionals in Quebec and around the world.

The Ministère de l'Agriculture, des Pêcheries et de l'Alimentation du Québec (MAPAQ) makes its hygiene and food safety program mandatory, and the ITHQ is the first institution in Quebec to offer this online training to workers in the restaurant and food industry.

As it is located in what is considered one of Montreal’s least attractive buildings, the ITHQ undergoes renovations and inaugurates its fully renovated space. The following year, the ITHQ receives the Governor General's Medal in Architecture for the innovative building concept developed in Europe but used for the first time in Quebec.

The ITHQ launches an innovative line of ITHQ Signature programs with enriched course content and a work-study format.

Inauguration of the Sœur-Angèle-Rizzardo room, a culinary arts workshop located on the 3rd floor, as a reminder of Sister Angèle’s exceptional contribution to the ITHQ’s outreach in Quebec.

The Fondation de l’ITHQ is established.

The ITHQ signs an agreement with Hydro-Québec to improve the energy efficiency of its systems and test next-generation cooking equipment.

The ITHQ partners with the Université du Québec à Montréal (UQAM) to offer a new bachelor’s degree program in tourism and hospitality management. The ITHQ becomes the only school in the country to offer secondary, CEGEP, and university programs.

The Government of Quebec passes an act making the ITHQ a public corporation administered by representatives from the tourism, hotel, and food service industries.

The ITHQ moves into its current premises on Saint-Denis Street, in the heart of Montreal’s tourism district.

A major fire destroys the ITHQ building, forcing it to temporarily relocate to 550 Poupart Street in the building left vacant by the École nationale de police du Québec, which had moved to a new location on Nicolet Street.

Following a proposal by Mr. Gabriel Loubier, Minister of Tourism, Fish and Game, the Government of Quebec founds the ITHQ to develop the province's tourism and hotel industry. The ITHQ replaces and moves into the offices of the École des métiers commerciaux at the corner of Saint-Denis and Sainte-Catherine in Montreal. Mr. Paul-Émile Lévesque is appointed as its first General Director. 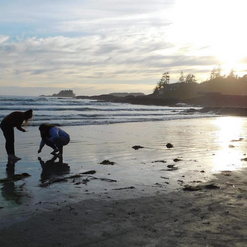 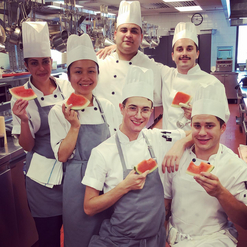 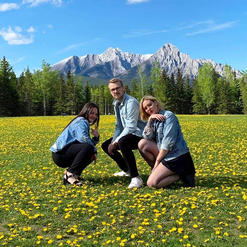 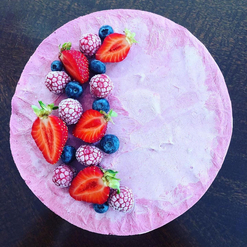