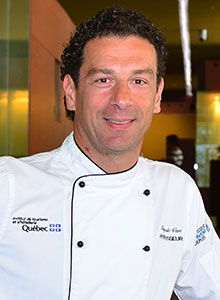 A native of Calabria, Italy, Pasquale Vari has been a teaching chef at the ITHQ since 1995. After receiving his degree in Italian cuisine from the Vibo Valentia hotel school in 1984, he went on to earn two ITHQ degrees: one in Professional Cuisine (1986) and one in Progressive Cuisine for Restaurants and Hotels (1987).

Highlights of his career include winning the gold medal in the 1991 Relais & Châteaux Awards of Excellence competition (Canada), and acting as expert chef for Québec to analyze the profession of Cook for Red Seal Canada. The coauthor of Parmigiano Reggiano (Éditions de l’Homme, 2006), he was also one of three professors who held a culinary workshop and cooked for the Duke and Duchess of Cambridge during their 2011 visit. In May 2012 he won the Renaud-Cyr award in the Chef Trainer category, and the following year his peers named him Chef cuisinier national for 2013. He has also acted as consultant and judge on the popular television show Les Chefs.